I’ve always loved Vespas…until this month.  A Vespa is a classy Italian scooter that was popular in Europe in the 1960s.  It was cleverly named after the yellow- and black-striped stinging insect because both are known for their distinctive buzzing sound.  “Vespa” is the Italian word for “wasp”.

But this August, anything remotely conjuring up the image of a wasp irritates me.  I’ve been keeping bees since May and once August hit, I haven’t been able to keep the wasps out of my two beehives. 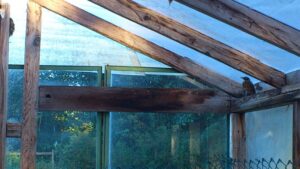 I first saw the wasps’ nest in the greenhouse rafters in mid-June.  At that time, there seemed to be only five or six.  They crawled slowly across their convex paper comb and seemed harmless enough.  I knew I should probably get rid of them before they became a nuisance to either people or our puppy, but I hadn’t really thought about them being a threat to bees.

After a bit of research, it turns out that wasps invade hives to steal honey and brood (baby bees).  They are parasitic and may paralyze other insects to feed as food to their own larvae.  Some people may find the wasp’s role of reducing the number of insects in one’s yard a blessing, but as a beekeeper, this wasp behaviour is a nuisance.  (I’m trying to be impartial because I feel such angst about wasps.  In reality, lots of people have been complaining about wasps being annoying this time of year.)

Instinctively, my initial thought when I saw the nest was to knock it down or spray it.  I’ve never been stung by a bee or a wasp (which is beekeeper blog topic for another occasion), so I didn’t want my first sting to be from several angry wasps who had a right to be aggressive.  As an environmentalist who is all-too-aware of the dangers of manufactured chemical pesticides, I was surprised that the idea to spray had even crossed my mind.  Why would I spray a pesticide inside the greenhouse with my food when I’m so opposed to agri-business doing the same?  What effects would it have on my Tumbler Toms and Thai peppers?  What was the cost benefit of doing so?  So, I did nothing. 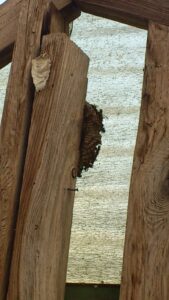 Then at the bee meeting, a nifty robber’s entrance was presented and explained.  It was ingenious.  It allows a beekeeper to close up the hive to stop wasps (and other robbing bees) while allowing airflow through mesh on the front of the hive.  There’s a secret entrance for the resident bees to come and go freely while fooling the robbers.  The entrance is near a metal cover that hides the bee pheromones, so robbers get distracted and fly toward the mesh (where they can smell the pheromones) but can’t find the true entrance.  As an aside, one of my favourite parts of beekeeping (and Comox Valley Beekeeper Association meetings) is discovering clever contraptions people have developed to solve problems. 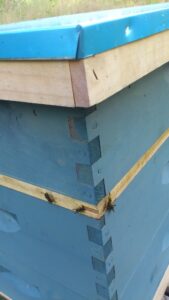 I admired this simple fix to the robber problem, but I didn’t buy the specialty hive entrance because I didn’t have a problem at the time nor the extra cash to warrant being proactive about the warnings that robbers would be coming.

Sure enough, within days of the bee meeting, I noticed that the wasps’ nest in the greenhouse had quadrupled in size.  I could hear them humming when I entered.  I went to the beehives and saw them frantically buzzing there too.  I fed the hives using my usual homemade feeders (upside down glass jars with holes in the top and a 2:1 sugar syrup inside), and my heart sank when I saw the sons-a-bitches inside the hive. 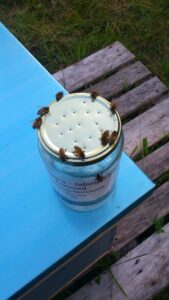 The wasps had gone too far, though, the day I saw a blatant attack on one my bees, in which the wasp grabbed her and flew her down to the ground.  I was videotaping and couldn’t tell what the outcome had been, but needless to say, I was pissed.

I left the feeders, knowing the wasps would probably be robbing it all day while I was at work, but I rationalized that it was better that they fed on the syrup rather than the actual honey the bees had already processed and stored for the winter. 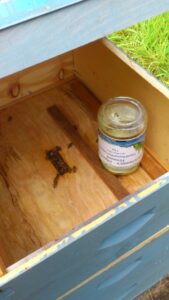 I had already pulled out the bottom board to let the bees cool off in the summer heat (via the screened bottom), but I decided to close up the hive up top as well.  I pulled out the push pins that usually keep the outer lid propped up, and I let it close completely (as designed).  I quickly ran in the house and returned with the entrance reducers that allow one bee in and one bee out at a time.  I slid it into place, hoping it would give the girls a fighting chance.

That evening, I set up my second line of defense – the homemade two-liter bottle wasp trap.  I cut off the top third and flipped it over to insert it in the remaining two-thirds of the bottle. 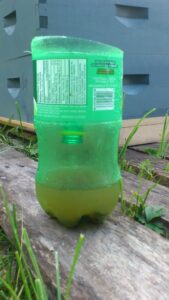 In true north Vancouver Island fashion, I popped open a Lucky.  I poured it into the trap and dripped a couple of drops of dish soap in as well, to break the surface tension so the little buggers would more easily drown (it sounds cruel writing it now).  I had found complex recipes that called for jam, but this is not meant to be a complex or expensive hobby, so I just used Lucky.

It turns out, wasps love Lucky.  I caught at least 10 wasps (and probably more) within the first 24 hours.  One bee keeper told me to leave the dead wasps in the trap as it will attract more (which appears to be true).  I also read a few online beekeeper reviews saying folks found this simple homemade trap to be more effective than purchased traps, which is great because now that I’ve kept the wasps out of the beehives, I am back to pinching pennies for a Vespa…scooter. 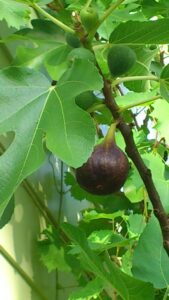 Fig wasps are a different species of wasp than the ones I’ve been battling, of course, but it illustrates that life’s ironic.  It’s also interesting that we appreciate some insects a lot (honeybees) but want to kill others (wasps).  It was also a nice reminder that if I’d had sprayed for insect with chemicals that I may have inadvertently killed the others I wanted around too.

p.p.s.  Bees and wasps construct similar looking comb, but bees have wax glands that produce the wax that is formed into comb.  I learned that wasps instead mix their saliva with materials (such as paper pulp or mud) to build comb.  When I was really upset with the wasps, I found this fact comforting – that the bees had such a dignified ability to produce a raw material rather than spit to make it.