Recently I had the good fortune of attending the Bee Masters course in Vancouver with some of our Club Members.  We learned a great deal as you can imagine but one of the things which stuck out for me was the topic of selection of queens by breeders for Hygienic traits.  This subject seemed to be at the heart of most issues affecting bee health and vigor. There are many levels of testing for selection including identifying specific genes, using liquid nitrogen to freeze a specific area of brood just to name a couple.  I won’t go over that section of the course here, but the take away for me was that if we can select for and improve the overall level of Hygienic behavior in our own apiaries the spill over and long-term effects will be significant. Having looked at the testing involved I thought I would have to wait and see, hoping they would be successful and we would eventually have better bees available for restocking.  But at a recent club event over the weekend, I was speaking with another small-scale beekeeper like myself (with about 5 hives) who was going to undertake such a selection. In our conversation it became clear that we could play a role and participate in the process. Ultimately benefiting by ending up with better bees ourselves and by flooding Drone Congregation Areas with those same desirable traits. Initially I thought it did not apply to the very small-scale beekeepers as we did not have ready access to the tools, nitrogen etc.  But it turns out there is a no-tech way for us to get involved. Before I get into that though it would be helpful to have a good understanding of the Hygienic Behavior Test itself involving the liquid nitrogen. Take a look at this PDF and you will get a pretty good handle on how it is done and what to look for.

Instead of liquid nitrogen, a no-tech work around would be to take a push pin and puncture all the capped brood cells in a 3” circle on one brood frame per hive.  This would involve getting a marker to define the 3” circle and then individually puncture each cell within it, killing the pupae. Replace the frame in the hive and check it 24 hours later to see how much of the 3” circle had been cleaned out.  Pretty simple really. Even if you only have two hives it would be worth doing because if you are going to make a split with one, you would be further ahead to split the most Hygienic one. It turns out there are well over 150 cells in a 3” circle and that means a lot of pin pricks per frame.  In an effort to make it a quicker process and knowing that if we can make it easier we are likely to get more participation, I embarked on making a plunger that could puncture all the cells at one go. You can see my efforts in the pics attached, I started with a 2” circle first to test the concept.   It is still a work in progress but I hope to have a working prototype by the time we get to open our hives with frames full of brood. I know we have some great minds and inventors in the club so if anyone else has some innovations, comments or ideas it would be terrific to see if we can’t get a workable method which makes hygienic testing simple and accessible for all small-scale beekeepers. 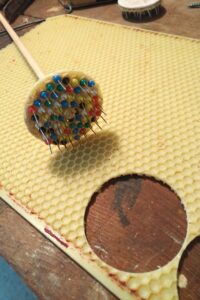 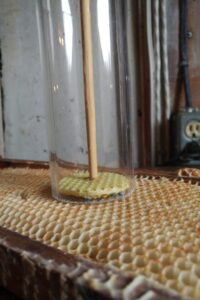 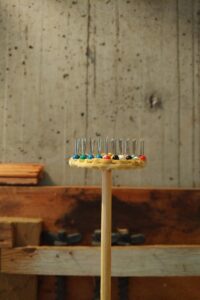