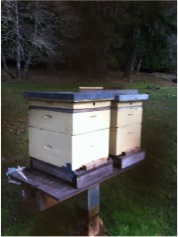 I love the spring, with all the promise it brings.  This will be our fourth year keeping bees and we continue to learn as if it were our first.  So on a sunny day in late March upon checking our 2 hives we started last year from a nuc and a package, I was thrilled to see the boxes overflowing with bees, jam packed!  A great relief as we had lost our last two hives the previous winter, likely to moisture in the hive.  I ordered a couple of queens in anticipation of splitting the 2 healthy hives into 4, and for good measure I ordered another package. I had Big plans. 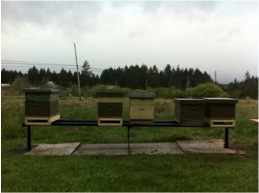 So the splits were made on April 28th, and the package installed.  Now we had to see if the queens would be accepted, the optimism was running high.  Everything was going according to plan.  The apiary was looking good, I had fed pollen patties (which they devoured) and they had good honey stores that we had salvaged and saved from the last seasons failed colonies.  Everything was going according to plan.

Swarm season!  But what luck, I am finding them, not losing them.  First one on the left,  May 11,  I hive in a dadent, and a few days later on the 13, I find another swarm on side of hive, this one I shake loose into a new deep and place alongside other hives.

Now I feel like a real beekeeper, two original hives expanding, two splits, two swarms and a new package, and it is only the middle of May! 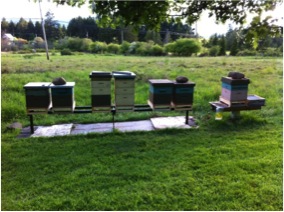 But things were not what they appeared, the splits had rejected their queens, or so I thought.  I decide against introducing new queens and instead, give both hives frames of capped and uncapped brood from the original hives (they were bursting and could easily spare them) and let them make their own queens. 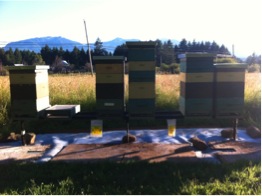 May 27 inspection, more bad news, the little swarm has laying workers, so I decide to shake off the house bees away from the apiary and let the flying bees return to a queen-right hive next door, much to my surprise this actually worked.  The other  larger swarm has vacated the deep they were in and so I am back down to the splits and the package.  Humbling experience, and upon further research I have learned more about catching swarms, (I should have read this first). 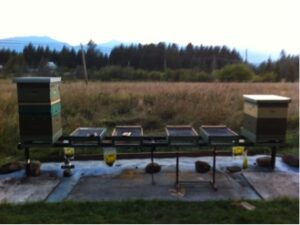 June 16 inspection, populations all look good, I find 2 queens in one of the original hives!  A little black one following/chasing a big gold one.  I leave them to sort it out.  One of the splits has uncapped brood and eggs, the other one still no eggs.

June 30th inspection, all hives look good except the last split, still no eggs so they were not able to make a queen.  I give them some frames of capped and uncapped brood from this year’s package, which had plenty to spare and they were the gentlest of the apiary.  This would be their last chance as far as I could see given the time of year.  Also set up wasp traps, you can see the yellow bags hanging.

I was away July and Aug and Tammy looked after the inspections, and took off a couple of honey boxes during the summer, things were looking good ! 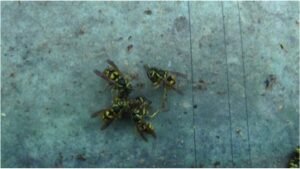 I return in Sept. and when we go over to inspect the hives we got the shock of the season….

Sept 7, all hives under attack from wasps. 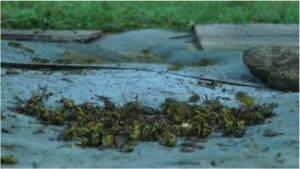 Entrance reducers not keeping them out.  3 Hives full of wasps, no bees, no brood no honey.  Removed.

They fed as greedily on their own dead (see  below) as they did on bees and larvae.

We took the last two surviving hives home to Comox to see if we could save them (fewer wasps here) and upon inspection, each remaining hive is queen-right but contains very few bees as shown on left.  The boxes are shallows and light, but luckily the deeps below have lots of stores so I put the deeps with honey on top and the bees will go up and spend the winter there

So a year in beekeeping comes to a close, optimistic start, re-queening success and failures, swarm catching success and failures, feeding and wasp trapping and in the end I am left with less than I started with.  A couple extremely small hives which are now in a dry safe place.  With the addition of new and improved insulated top covers and moisture wicking egg cartons, new ventilation holes and I will also cover the hives to keep driving rain off, I must remain content that I have done all I can for the girls, hope for the best in the spring when we will start all over….

Now, after having talked to many other beekeepers it seems that catastrophic losses to wasps were experienced by many and we were lucky to loose only 3 out of 5.  And reports from non-beekeepers also confirmed a bad year for wasps all along the coast and in the world.  If  you read this article from the Guardian http://www.theguardian.com/world/2013/oct/04/killer-hornets-chinese-city-living-in-fear it will make our problems seem like child’s play compared to what this community in China is experiencing.   The sting of the highly venomous giant Asian hornet (vespa mandarinia), which measures about the size of a human thumb, can dissolve human tissue and cause kidney failure, (many people have died from numerous stings).  An Asian hornet below, devouring a honey bee.