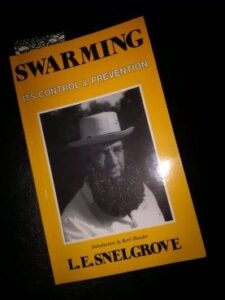 Beekeepers fortunate enough that their hives, having survived the winter, now are on high alert looking out for Swarms and how to prevent them.  There was some good discussion on this at our most recent meeting and I wanted to share my experience with one of them. The Snelgrove swarm board method which I implemented last year and have already started this year.   Many people, myself included when first introduced to this method find it complicated but actually it is very simple once you understand the concept, and it works !

The Snelgrove method was first described by Leonard E Snelgrove in his 1934 book, “Swarming – It’s Control and Prevention”. https://www.amazon.ca/Swarming-Its-Control-Prevention-Snelgrove/dp/0905652398  It is a fascinating little book and if you can get one I urge you to add it to your library.  He describes and discusses many swarm control methods in addition to his own. I built a variation of his double screened swarm board and put it into service.  I modified the orientation of the boxes to suit my needs as described below. The principle is to separate the flying bees with the queen from the rest of the hive creating the impression that they have already swarmed and can start rebuilding.  The beauty of it is that once the board is in place you can alternate the access to the separated hive boxes maintaining the colony strength, in fact enhancing it and maybe ending up with a double queen hive (very likely if you get one in place early enough).  The idea is simple really; you separate the boxes of your hive into two categories. In one box you have the queen, frames of brood, stores and frames of drawn comb (we’ll call this A). In the second category you have all the frames with eggs, uncapped and capped brood and bees (we’ll call this B).  You now put the hive back together with “B” on the bottom board and a super above. Now the Snelgrove board goes on and on top of that “A” or the box with all the frames of brood, bees and the queen. 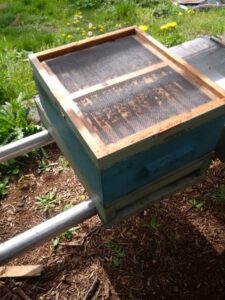 First step is to open door #1, all the flying bees that are in that upper box will exit and return to the bottom where they and all the other flying bees return to.  Any newly hatched bees in the upper box will now use that entrance to come and go after their orientation flights. 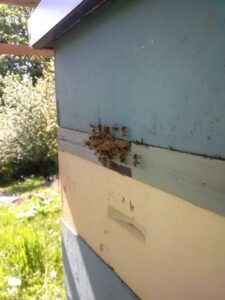 One week later close door #1 and open door #2 and open door #3 on the opposite side.  The bees from the upper box that were using #1 will now return to the bottom via #2 ending up in the bottom box and new bees will begin to use #3 to come and go because this is where they will orient to now. 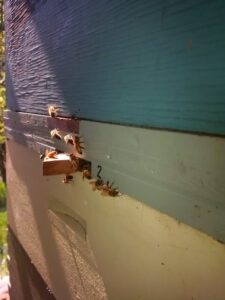 Wait another week and open door #4 and #5 (at the back) and close #3.  Once again the bees that had been using #3 from the upper box will now return to the lower box via door #4 and new bees will begin to use #5 from the upper box.   Continue on with this rotation, while checking for space in each hive and add boxes as needed. 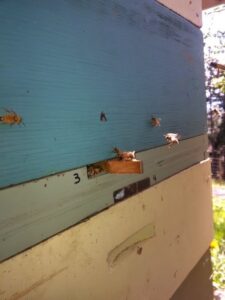 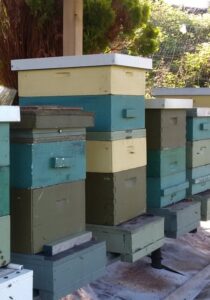 Sounds complicated but actually very simple and easy to understand once you get the idea of what is going on.  The bottom box is continually being reinforced with flying bees, the queen has lots of room to lay, there is little brood to feed in the bottom box so nectar coming in is stored freely.   So no downsides really, hive forager strength is maintained and enhanced through the flow, swarms are not likely as they are in an artificial swarm state. There is a possibility/likelihood that the bees in the lower box “B” may make a queen and she starts laying too, further increasing the flying bees bringing in stores.  But hey now we have a double queen hive, quality problem! This is in fact what happened for me in 2016. You can choose to recombine at the end of the flow, keeping the younger or better queen, make another hive or sell it. Either way, you have proactively intervened in the swarm impulse and improved your odds of a honey crop.

As with anything in Beekeeping there are more questions than answers…. what if there are already queen cells before you start?, what is the timing of the entrance rotations?, what if the virgin queen from comes back from her mating flight and goes in the wrong entrance?….. Well too much to cover here, you gotta get the book if you want all the answers, but it is fun trying out these different methods for sure.  Also you can make your own decisions based on what you observe and what your goals are.

I also use this method to make use of Dinks (queenright colonies which just don’t seem to build up or thrive on their own), thereby making use of her flying bees to add to the foragers of a strong colony below.

Ok, So….. if you’re not having fun with your bees, you’re not beekeeping right!