Ever since I read A Recipe for Bees and The Secret Lives of Bees  I’ve been captivated by beekeeping.  I’ve longed to get my own hives, bottle my own honey, dance in the bee yard covered in my lovely, gentle bees. I imagined that I would totally be in touch with the inner workings of my bees, I’d anticipate their needs, and I’d communicate with them on a celestial level.  They’d know what I was thinking and I would know what they were thinking.  It would magical and people would think I was cool. 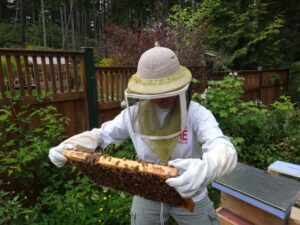 It appears that I don’t know jack squat about bees and they seem to care less about what’s going on with me.  Seriously.  I got my first 2 hives in May as nucs.  And my crash course bee school began: 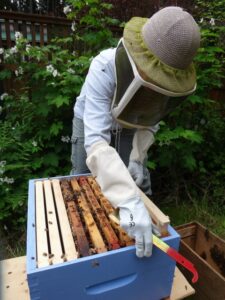 “What do you mean I have to feed them?  They’re BEES!  They feed themselves, don’t they?”
“Oh, I can build and paint all these hive bodies and wire and embed all 60 frames in one weekend, no problem, says the internet.  I beg to differ.  How does one embed wax on a frame without electrocuting oneself or catching things on fire?”
“What do you mean the hive box has to be square?  Can’t I just eyeball it?”
“Swarms?  What the hell?  I just got these bees and they swarmed 3 times before July.  I read that new colonies don’t swarm in their first year!”
“How much equipment DO I need?  I thought they’d live in one hive forever and ever. “
“What the heck is a split?”
“Robbing? What’s that?”
“Where is my honey? “

Fortunately, despite my best efforts, my bees are very healthy and happy and I have learned a boat load.  The three swarms were hard to take but the remaining bees rallied.   My girls are quite friendly and I’ve only had one sting…and I’m not entirely sure it was a honeybee that stung me.  I can often tend to them without smoke or sugar syrup.  I’ve been reading and watching YouTube videos about bees non-stop since February, trying to cram all the bee knowledge into my head, only to have it explode at every bee club meeting where each bee keeper has the exact opposite advice as the next.

I love observing the bees in the morning, cereal bowl in hand, watching them trundle into the hive with pollen packs bulging, doing their bee thing. I really love my bees, those mysterious creatures are ever fascinating.

I have no idea what they are thinking, but they seem to be okay.
And so am I, even though I’m not the bee whisperer I imagined.